Launch a live quest in your city!

Launch your own live quest with the assistance of the company KOMNATA. Entertainment popular all over the world! Unique scripts! 2-month post-training support. Exclusive right to open an outlet valid for 6 months. The company KOMNATA has now hosted about 2000 games and opened 2 game sites.

Launch a live quest under your own brand name!

Live quests (or escape room games) are very popular everywhere in the world. They offer a great alternative to cinemas, entertainment centres, cafés and bars. The main task of 2-4 players is to get out of the room they are locked in within an hour by solving logical tasks and using the objects around them. Players enjoy real adventures, see their friends and themselves in a new light. The company KOMNATA has now hosted about 2000 games and opened 2 game sites. 2 franchising outlets are working in Russia. The management company is headquartered in a small city in Russia. A game site brings the management company approximately 300 000 Rubles a month* (£6 000, if we base calculations on the Big Mac Index)*. 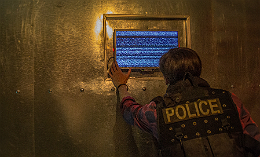 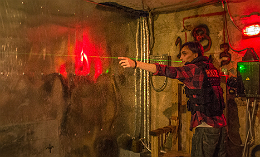 The company founders were inspired by one of the scariest attractions in the world, located in Cyprus. KOMNATA quests were launched in 2014 in the city of Kemerovo where they quickly gained popularity. One of the distinguished features of the quests is involvement of actors. They turn every escape room game into an incredible performance. KOMNATA scripts make every performance unique. The target audience is large: anyone from the age of 15 can participate in the quests. KOMNATA quests are entertaining for both young people and people of the older generation.

Realistic game sites distract players from the routine of their daily lives! 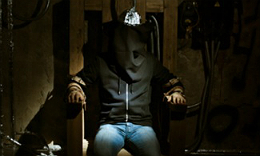 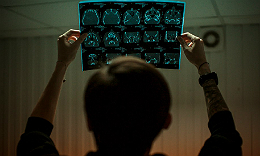 Launch your own live quest with consulting from the company KOMNATA! To start working you will need a space of 50-80 sq m. The starting package includes complex online training, access to the knowledge base (describing the experience of the management company), 2-month post-training support. This will allow you to have a successful launch and then run the business smoothly. All the contents of the package have been translated into English. Every dealer will get temporary exclusive rights to host quests in a territory of up to 300 000 people. The territory will be specified in the partner Certificate. The company KOMNATA won’t provide consulting services to potential partners in the territory specified in the Certificate during 6 months after the signing of the agreement.

Involvement of an actor in each game makes it extremely exciting!

Be the first to launch a live quest in your city! You have a great opportunity to offer a popular entertainment to the people of your city! Learn from the rich experience of the company KOMNATA! The management company is headquartered in a small city in Russia. A game site brings the management company approximately 300 000 Rubles a month* (£6 000, if we base calculations on the Big Mac Index)*.

A co-founder of the company, Denis Khvorov, talks about the difficulties of creating a first quest

Interested? Then see other information about the business! You’ll find profits calculation, starting package contents and a video interview where the company’s co-founders, Evgenii Kochnev and Denis Khvorov, talk about the product and the peculiarities of the business.

Next to profits calculation!

*Whether or not your business is successful depends on your own hard work. The price provided in GBP reflects the date when the calculations were made as well as the relevant Big Mac Index.

Prices in Russia and in the UK differ. For you to understand the potential of the business we used the Big Mac Index in our calculations (the cost of a Big Mac). A Big Mac consists of a number of goods (bread, cheese, meat and vegetables) so it could be considered a clear reflection of the national economy. Of course, it’s not the best way of comparing the pricing in different countries but it can give you a general idea.

Judging by the operation of KOMNATA in Russia, after 4* months of running the business you will host 150* quests a month. Average cost of a game is 2 000 Rubles* (£40, if we base calculations on the Big Mac Index*). If 150 games are held at your game site, your profits should amount to £6 000 a month*, considering the Big Mac Index. Bear in mind that you’ll be able to set prices for your customers yourself. You may want to set a higher price for your services in the UK. It’s up to you.

* Results are not guaranteed and depend on your hard work.

Important: we don’t take into account the number of small business for every 1000 people. However, this criterion is much higher in the UK than it is in Russia, which signifies a greater potential of the business.

Your expenses will include office rent, payroll, taxes. If you will be working on your own, you can exclude rental and payroll expenses from the list. However, there may be other expenses that you will have to take care of.

IMPORTANT! The cost of the package and all calculations are approximate. For your convenience all figures are provided in the GBP according to the currency exchange rates at the day of publication of this information. Real calculations will be made in the US Dollars according to the currency exchange rates that will be relevant at the day of the transaction.

How to start next

The calculations are based on the data received from the management company. The provided data does not guarantee the success of your business. It is always up to you to make your business successful.

In order to begin our collaboration, we have to sign the agreement first. Once you pay for the starting package you will receive documentation, layouts of advertising materials and study materials in digital format. Your first training via Skype will also take place after you make the payment. Once you sign the agreement it takes about a month to open your school, considering you rent a space and hire teachers in advance.

Exclusive right valid for 6 months. The management company shall not provide consulting services to other potential partners in the territory specified in the Certificate during 6 months after the signing of the agreement.

Access to the knowledge base. The guaranteed access term is 1 year after the signing of the partnership agreement.

2-month post-training support (after the launch of the business), provided via email.

Interview with the founders of the chain of live quests KOMNATA, Evgenii Kochnev and Denis Khvorov

Business updates on microblog next

Evgenii Kochnev and Denis Khvorov’s company was founded in 2014. The main goal of participants of live quests is to escape the room they are locked in within an hour by solving logical tasks...

Unique Russian room escape games for the people of your city!

Live quests (room escape games) are popular all over the world. Every big city has such entertainment on offer. However, no one can pride themselves on such unique game scripts as the company KOMNATA...